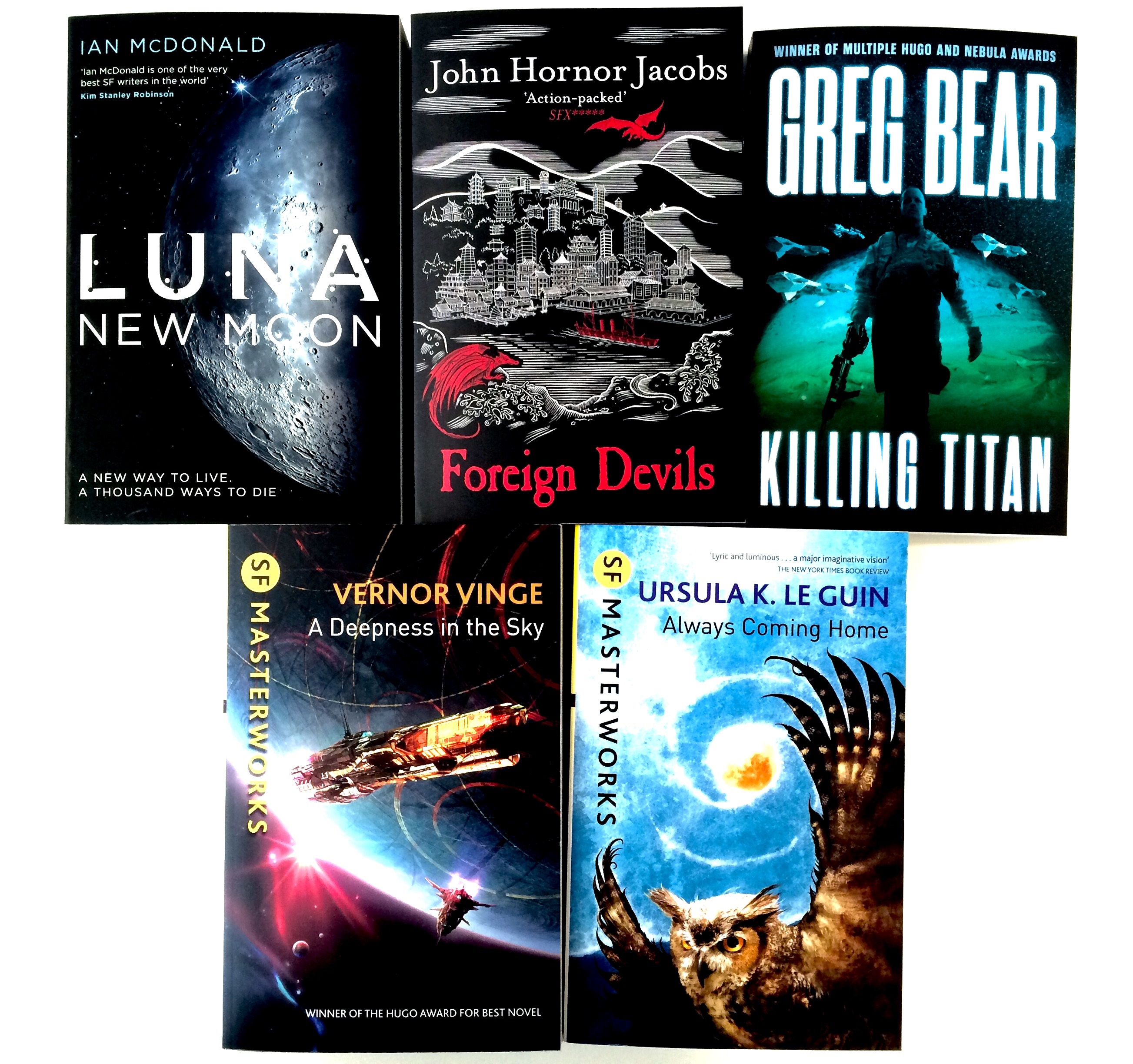 It’s a bumper day for paperbacks, which means it’s a good day for your wallet which just means you can get even more books! We have a fantasy described by Patrick Rothfuss as a ‘strange alchemy, a recipe I’ve never seen before’, two hard sf novels that will leave you both yearning for space yet terrified of it, and lastly two SF Masterworks (Gotta get ‘em all!) to add to your shelves.

Luna: New Moon by Ian McDonald has been described as Game of Thrones in space with added zero-g sex and cocktails. Need we say more?

THE MOON WANTS TO KILL YOU.

She has a thousand ways to do it. The bitter cold of vacuum. The lethal sleet of radiation. Choking udst as old as the earth. Your weakening bones .

Or you could run out of money for water. Or air. Or simply run foul of one of the Five Dragons, the corporations that rule the Moon and control its vast resources.

But you stay, because the moon can make you richer than you can imagine.

This has been picked up for TV so get it before it explodes!

‘I will read anything that man writes’ Cory Doctorow

‘Provocative, gripping and prancingly adult, it’s a stunning example of how good science-fiction can be, and proof that McDonald is one of the best writers currently working in the genre’ SFX

Luna: New Moon is out now in paperback.

Foreign Devils by John Hornor Jacobs is ‘One part ancient Rome, two parts wild west, one part Faust. This is strange alchemy, a recipe I’ve never seen before. I wish more books were as fresh and brave as this’ (Patrick Rothfuss).

The great states of Rume and Mediera are on the brink of war.

Meanwhle, mercenaries Fisk and Shoe are back to doing what they do best – tracking down the infernal engineer who caused the fragile peace to be broken.

Exiled to Kithai, Livia and Secundus Cornelius hope to sqay the Tchinee to ther side in the ewar. But the Autumn Lords harbour a secret . . . one which might set the world on fire.

Foreign Devils is out now in paperback.

Killing Titan by Greg Bear continues his War Dogs trilogy and takes the action from Mars and across the solar system. This is masterful military science fiction from one of the genre’s great writers.

A NEW PLANET. A NEW BATTLE. THE SAME WAR.

After barely surviving his last tour, Master Sergeant Michael Venn finds himself in enforced isolation. That is until, through a dangerous series of operations, he returns to Mars to investigate the Drifters – ancient artifacts suddenly reawakened on the Red Planet.

But another front in the war leads his team to make the difficult journey to Saturn’s moon, Titan. Here, in the cauldron of war, hide new truths about the Drifters, the origin of life in our solar system, and the plans of the supposedly benevolent Gurus.

Killing Titan is out now in paperback.

Always Coming Home by Ursula K. Le Guin is one of those books that will take your breath away with its imagination and scope. An entire future history realised from the author’s imagination, complete and deeper than many real histories. With an introduction by John Scalzi, this is a SF Masterwork not to be missed.

A long, long time from now, in the valleys of what will no longer be called Northern California, might be going to have lived a people called the Kesh.

‘The effect it has on the reader is hypnotic . . . Le Guin has chosen a most original way to reveal this imagined land’ People

Always Coming Home is out now in paperback.

A Deepness in the Sky by Vernor Vinge is a prequel to the Hugo Award-wining A Fire Upon the Deep and a Hugo-winner itself. Vernor Vinge is one SF’s preeminent writers and also, notably, popularised the idea of the technological singularity back in the early 90s. Another SF Masterwork not to be missed.

This is the story of Pham Nuewen, a small cog in the interstellar trading fleet of the Queng Ho. Both they and the Emergents are orbiting Arachna, a dormant planet which will shortly wake up when it’s On/Off star relights after decades of darkness. Both groups hope to exploit the coming age of technology and commerce on Arachna.

But while the Queng Ho seek only to trade aggressively, the Emergents’ plans are far more sinister, amounting to little short of genocide. . .

‘A feast of imagination. As always, Vinge satisfies with richly imagined worlds and a full-flavoured story’ Greg Bear

A Deepness in the Sky is out now in paperback.