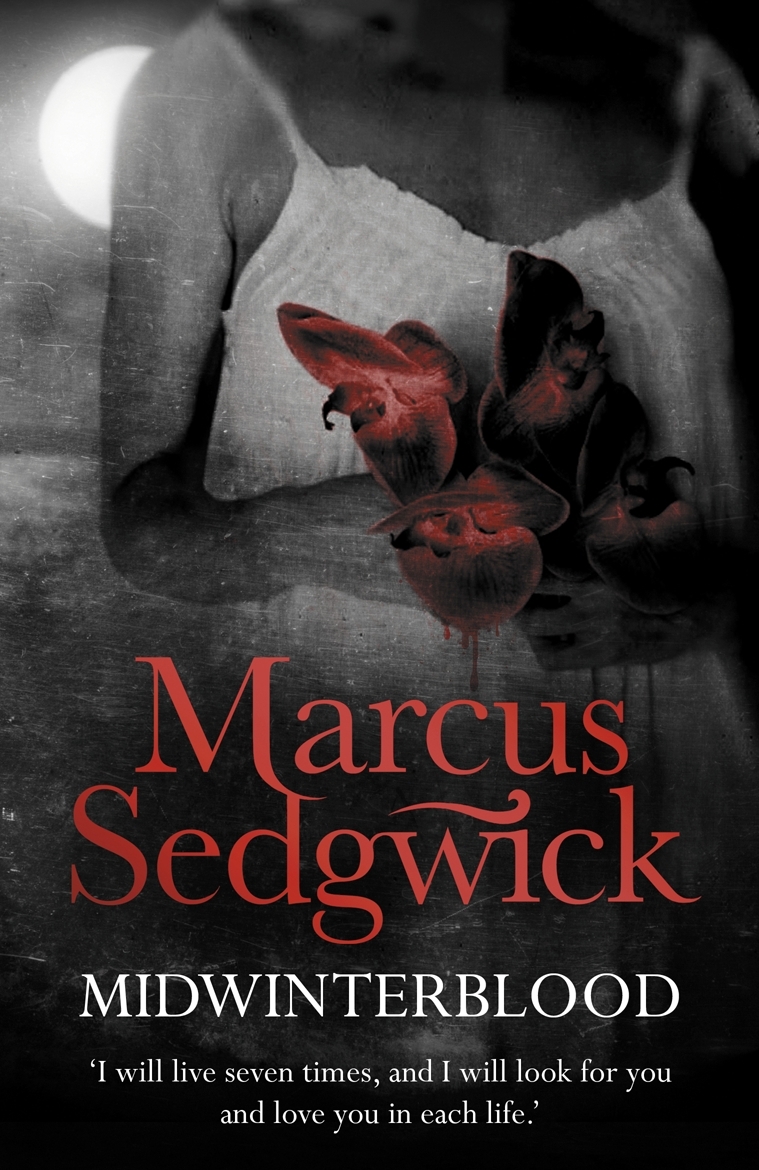 We are very pleased to have a special guest post from Marcus Sedgwick, who is published by our YA sister imprint Indigo.

Marcus Sedgwick used to work in children’s publishing and before that he was a bookseller. He now happily writes full-time. His books have been shortlisted for many awards, including The GUARDIAN CHILDREN’S FICTION AWARD, the BLUE PETER BOOK AWARD, the CARNEGIE MEDAL and the EDGAR ALLAN POE AWARD. Marcus lives in Cambridge and has a teenage daughter, Alice. His new novel MIDWINTERBLOOD is out now in paperback.

It’s not every day that a whole book pops in to your head, in one great dollop. I’d spent many years finding that out for myself, the hard way, as I built books piece by piece, over weeks or months, waiting for the whole picture to emerge. And so I frequently told people that it just doesn’t happen… Until it finally did happen to me, with MIDWINTERBLOOD. I was cycling around a small Swedish island when the book arrived in my head. When I say the whole thing appeared at once, I should qualify that I don’t mean I knew every word, or every chapter, but that I could see the overall scheme of the book, in seven parts, what would happen in each one, what the book and the seven parts were about and, most importantly perhaps, WHY I was writing it.

That being said, the inspiration for the book is a painting, and I’d first seen this painting 5 years before that happy moment I describe above. So maybe my subconscious would tell you it took a little longer than I’m claiming. This painting, by Sweden’s greatest painter, Carl Larsson, is called Midvinterblot, or Midwinter Sacrifice. It depicts a scene, from Norse Sagas, of the sacrifice of King Domaldr during a time of famine and infertility. It’s a masterpiece, and it’s huge. 14 metres wide, you have to crick your neck to gaze at it, far above your head in Stockholm’s National Museet. The central trio of figures are bigger than life-size, and capture the true genius of the painting – that what it shows is not the violence of the sacrifice itself, but the moment just before that violence.

The first time I saw it, I knew it told a story and I knew I wanted to write a book inspired by it. But because I didn’t just want to retell what I saw going on in the painting, it took me those five years to wait for the right approach. So in Midwinterblood what you get is not just one story of sacrifice and love, but seven such stories. We start in the future and work back through the present, the Second World War, the early 20th century, and so on, until we finally arrive in the prehistory of the painting itself. All seven stories interlock to tell an eighth bigger story, but what that meant for me is that I got the chance to write seven very different parts of the book, in different genres almost, from a piece of sci-fi to open, via a war story and a ghost story, and even, in what is perhaps my favourite part of the book, a Viking vampire story, based on the fact that the Icelandic sagas do actually contain one or two vampiric incidents, of a very brutal and un-Stokerish nature.

Writing is a great job. It’s not without its frustrations, but the short and feverish time I spent writing Midwinterblood has to be the highlight of my writing career to date. I wish it could always be so easy!

Intrigued? Read the first chapter of MIDWINTERBLOOD below!

The sun does not go down. This is the first thing that eric Seven notices about blessed island. There will be many other strange things that he will notice, before the forgetting takes hold of him, but that will come later.

For now, he checks his watch as he stands at the top of the island’s solitary hill, gazing to where the sun should set. it has gone midnight, but the sun still shines, barely dipping its heavy rim into the sea on the far horizon.

The island is so far north. He shakes his head.

He’s thinking about Merle. How something seems to wait in her eyes. How he felt calm, just standing next to her.

‘well, so it is,’ he says, smiling with wonder. He’s tired. His journey has been a long one.

The strangeness began on the plane.

The flight to Skarpness was not full, maybe half the seats were empty, but there was nevertheless a good number of people. Mining company folk mostly, heading to the northern interior, Eric guessed.

He took his seat by the window and did what everyone does before the instruction to switch off communications; he selected onedegree on his device, and bumped.

He rebooted the app, and bumped again. nothing.

He shook his head, unable to understand it.

The  onedegree  app  is  based on  the  principle of six degrees of separation. Eric  knows all about it. As a journalist, it is his job to know about communication in its many forms. Since its invention, when some clever soul realised that it often takes not six, but merely one step to connect you to most other people in the world, the app, or its current version, sits in the palm of everyone’s hand. when going on a journey, or arriving in a new place, the easiest way to make friends quickly is to bump the air around you with onedegree. Maybe no one you know is on the same plane, but someone who knows someone you know is likely to be. or someone who went to school with a friend of yours. or who works where you worked ten years ago. And so on and so on. then you have someone to pass the journey with, at the least, and maybe a new friend for life. And although that’s never happened to eric, in all his years of using onedegree on so many solitary journeys around the world, he has never failed to find some kind of link among a group of a hundred or more who would otherwise have remained total strangers.

So that is why he stared a moment longer at his device, wondering if the new version had a bug.

As if something sinister had happened, he leaned out of his seat and a little furtively studied his fellow passengers.

They were a tough lot. Miners, he thought. tough.

Work and worry were drawn on their faces, in skin aged by the cold. they were silent, merely nodding at the smiling attendants who floated down the aisle, proffering drinks.

‘You’ll have to switch that off now, Mr Seven,’ said a voice, and he turned to see one of them looking down at him. She checked her device, making sure she’d got his name right.

He  scratched the back of his head, pushed a badly behaved strand of dark brown hair out of his eyes.

He shook his head. How could he have managed not to bump anyone on the flight? not even at the weakest level of connection.

He did have a nice flight.

The  plane arrowed due north, clinging to the coast almost the whole way. it was spectacularly beautiful.

The  coastline was a broken fractal, the sea was deep blue, the rocks of the shore gentle mottled greys and browns. inland, the ground climbed steadily into forests, which eventually gave way to treeless mountaintops.

About noon the plane landed at Skarpness, and as eric predicted, most of the passengers picked up transport heading for the big mine.

For the hundredth time, he pulled out the instructions the desk editor’s assistant had given him, and made his way on foot to the ferry terminal, where he boarded the steam-boat for the short trip to blessed island.

He knows little about the place.

Just the rumours. but  then, that’s all anyone knows, and that, after all, is the whole point of his trip, to find out something about the island.

there  is nothing much about it on the net. nothing beyond the times of the steam-boat, the hours of sun-fall and moon-up, a brief history of the old fishing trade, now gone.

No  first-hand accounts, no original source material. the pages that do mention them are simply rehashes of each other, leaving very few original hits to glean anything from.

So little to be read on the net; that’s another strange thing about the place.

All he’s heard are the rumours, stories, the speculation, and the swiftly lost words of whispered secrets, about the island where people have started to live forever.