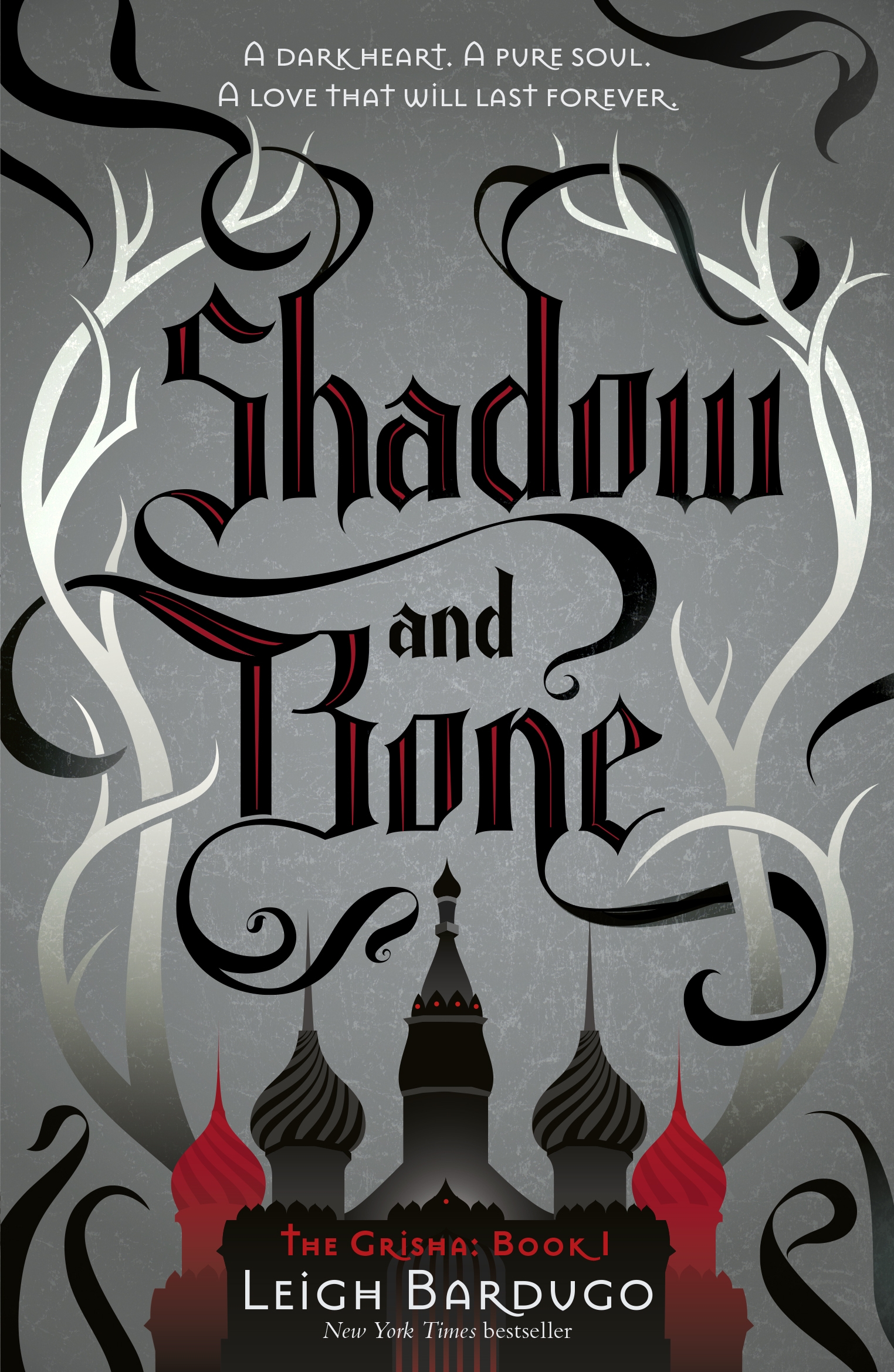 Leigh Bardugo’s Shadow and Bone is our brilliant Gollancz Book of the Month, and today we’re sharing chapter two with you. If you’re a Gollancz Geek, some of you will have been quick off the mark today to get your hands on a review copy. We can’t wait to hear what you think! If you missed chapter one, you can catch up here, and don’t forget to watch the brilliant trailer!

The morning passed in a blur: breakfast, a brief trip to the Documents Tent to pack additional inks and paper, then the chaos of the dry dock. I stood with the rest of the surveyors, waiting our turn to board one of a small fleet of sand skiffs. Behind us, Kribirsk was waking up and going about its business. Ahead lay the strange, shifting darkness of the Fold.

Animals were too noisy and scared too easily for travel on the Unsea, so crossings were made on sand skiffs, shallow sleds rigged with enormous sails that let them skate almost soundlessly over the dead grey sands. The skiffs were loaded with grain, timber, and raw cotton, but on the trip back they would be stocked with sugar, rifles, and all manner of finished goods that passed through the seaports of West Ravka. Looking out at the skiff’s deck, equipped with little more than a sail and a rickety railing, all I could think was that it offered no place to hide.

At the mast of each sled, flanked by heavily armed soldiers, stood two Grisha Etherealki, the Order of Summoners, in dark blue kefta. The silver embroidery at their cuffs and the hems of their robes indicated that they were Squallers, Grisha who could raise or lower the pressure of the air and fill the skiffs’ sails with wind that would carry us across the long miles of the Fold.

Soldiers armed with rifles and overseen by a grim officer lined the railings. Between them stood more Etherealki, but their blue robes bore the red cuffs that indicated they could raise fire.

At a signal from the skiff’s captain, the Senior Cartographer herded me, Alexei, and the rest of the assistants onto the skiff to join the other passengers. Then he took his place beside the Squallers at the mast, where he would help them navigate through the dark. He had a compass in his hand, but it would be of little use once we were on the Fold. As we crowded on deck, I caught a glimpse of Mal standing with the trackers on the other side of the skiff. They were also armed with rifles. A row of archers stood behind them, the quivers on their backs bristling with arrows tipped in Grisha steel. I fingered the hilt of the army-issue knife tucked into my belt. It didn’t give me much confidence.

A shout rang out from the foreman on the docks, and crews of burly men on the ground began pushing the skiffs into the colourless sand that marked the furthest reaches of the Fold. They stepped back hurriedly, as if that pale, dead sand would burn their feet.

Then it was our turn, and with a sudden jolt our skiff lurched forward, creaking against the earth as the dockworkers heaved. I grabbed the railing to steady myself, my heart beating wildly. The Squallers lifted their arms. The sails billowed open with a loud snap, and our skiff surged forward into the Fold.

At first, it was like drifting into a thick cloud of smoke, but there was no heat, no smell of fire. Sounds seemed to dampen and the world became still. I watched the sand skiffs ahead of us slide into the darkness, fading from view, one after another. I realised that I could no longer see the prow of our skiff and then that I could not see my own hand on the railing. I looked back over my shoulder. The living world had disappeared. Darkness fell around us, black, weightless, and absolute. We were in the Fold.

It was as if we were standing at the end of everything. I held tight to the railing, feeling the wood dig into my hand, grateful for its solidity. I focused on that and the feel of my toes in my boots, gripping the deck. To my left, I could hear Alexei breathing.

I tried to think about the soldiers with their rifles and the blue-robed Grisha pyros. The hope in crossing the Fold was that we would pass through silently and unnoticed; no shot would sound, no fire would be summoned. But their presence comforted me all the same.

I don’t know how long we went on that way, the skiffs floating forward, the only sound the gentle rasp of sand on their hulls. It seemed like minutes, but it might have been hours. We’re going to be okay, I thought to myself. We’re going to be okay. Then I felt Alexei’s hand fumbling for mine. He seized hold of my wrist.

“Listen!” he whispered, and his voice was hoarse with terror. For a moment, all I heard was his ragged breathing and the steady hiss of the skiff. Then, somewhere out in the darkness, another sound, faint but relentless: the rhythmic flapping of wings.

I grabbed Alexei’s arm with one hand and clutched the hilt of my knife with the other, my heart pounding, my eyes straining to see something, anything in the blackness. I heard the sound of triggers being cocked, the tap of arrows being notched. Someone whispered, “Be ready.”

We waited, listening to the sound of wings beating the air, growing louder as they drew nearer, like the drums of an oncoming army. I thought I could feel the wind stir against my cheek as they circled closer, closer.

“Burn!” The command rang out, followed by the crackle of flint striking stone and an explosive whoosh as rippling blooms of Grisha flame erupted from each of the skiffs.

I squinted into the sudden brightness, waiting for my vision to adjust. In the firelight, I saw them. Volcra were supposed to move in small flocks, but there they were . . . not tens but hundreds, hovering and swooping in the air around the skiff. They were more frightening than anything I had ever seen in any book, than any monster I could have imagined. Shots rang out. The archers let fly, and the shrieks of volcra split the air, high and horrible.

They dived. I heard a shrill wail and watched in horror as a soldier was lifted from his feet and carried into the air, kicking and struggling. Alexei and I huddled together, crouched low against the railing, clinging to our flimsy knives and muttering our prayers as the world dissolved into nightmare. All around us, men shouted, people screamed, soldiers were locked in combat with the massive, writhing forms of winged beasts, and the unnatural darkness of the Fold was broken in fits and starts by bursts of golden Grisha flame.

Then a cry rent the air next to me. I gasped as Alexei’s arm was yanked away. In a spurt of flame, I saw him clutching at the railing with one hand. I saw his howling mouth, his wide, terrified eyes, and the monstrous thing that held him in its glistening grey arms, its wings beating the air as it lifted him from his feet, its thick claws sunk deep into his back, its talons already wet with his blood. Alexei’s hand slipped on the railing. I lunged forward and grabbed his arm.

The flame vanished, and in the darkness I felt Alexei’s fingers pulled from mine.

His screams faded into the sounds of battle as the volcra carried him into the dark. Another burst of flame lit the sky, but he was gone.

“Alexei!” I yelled, leaning over the side of the railing. “Alexei!”

The answer came in a gust of wings as another volcra swooped down on me. I careened backwards, barely avoiding its grasp, my knife held out before me with trembling hands. The volcra lunged forward, the firelight glinting off its milky, sightless eyes, its gaping mouth crowded with rows of sharp, crooked black teeth. I saw a flash of powder from the corner of my eye, heard a rifle shot, and the volcra stumbled, yowling in rage and pain.

“Move!” It was Mal, rifle in hand, face streaked with blood. He grabbed my arm and pulled me behind him.

The volcra was still coming, clawing its way across the deck, one of its wings hanging at a crooked angle. Mal was trying to reload in the firelight, but the volcra was too fast. It rushed at us, claws slashing, its talons tearing across Mal’s chest. He screamed.

I caught hold of the volcra’s broken wing and stabbed my knife deep between its shoulders. Its muscled flesh felt slimy beneath my hands. It screeched and thrashed free of my grip, and I fell back, hitting the deck hard. It lunged at me in a frenzy, its huge jaws snapping.

Another shot rang out. The volcra stumbled and fell in a grotesque heap, black blood pouring from its mouth. In the dim light, I saw Mal lowering his rifle. His torn shirt was dark with blood. The rifle slid from his fingers as he swayed and fell to his knees, then collapsed onto the deck.

“Mal!” I was at his side in an instant, my hands pressing down on his chest in a desperate attempt to stop the bleeding. “Mal!” I sobbed, the tears streaming down my cheeks.

The air was thick with the smell of blood and gunpowder. All around us, I heard rifle fire, people weeping . . . and the obscene sound of something feeding. The flames of the Grisha were growing weaker, more sporadic, and worst of all, I realised the skiff had stopped moving. This is it, I thought hopelessly. I bent low over Mal, keeping pressure on the wound.

His breathing was laboured. “They’re coming,” he gasped.

I looked up and saw, in the feeble, fading glow of

Grisha fire, two volcra swooping down upon us.

I huddled over Mal, shielding his body with mine. I knew it was futile, but it was all I could offer. I smelled the fetid stench of the volcra, felt the air gusting from their wings. I pressed my forehead to Mal’s and heard him whisper, “I’ll meet you in the meadow.”

Something inside me gave way, in fury, in hopeless- ness, in the certainty of my own death. I felt Mal’s blood beneath my palms, saw the suffering on his beloved face. A volcra screeched in triumph as its talons sank into my shoulder. Pain shot through my body.

And the world went white.

I closed my eyes as a sudden, piercing flood of light exploded across my vision. It seemed to fill my head, blinding me, drowning me. From somewhere above, I heard a horrible shriek. I felt the volcra’s claws loosen their grip, felt the thud as I fell forward and my head connected with the deck, and then I felt nothing at all.