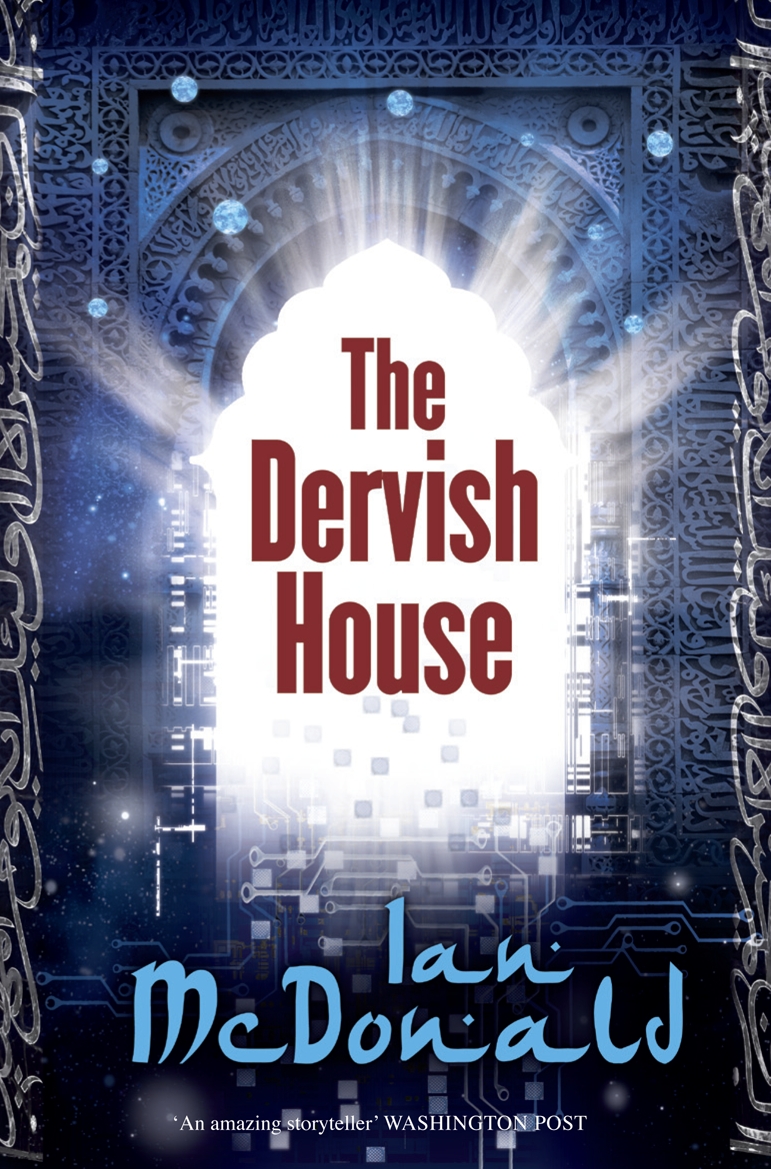 To celebrate World Book Day here at Gollancz Towers we’ve each come up with a book we wanted to share with you. A book for life.

And because it’s World Book Day we’re offering you a chance to win each of the books listed. To enter simply send an email to: competitions@orionbooks.co.uk with the subject line WORLD BOOK DAY by the 5th March. Happy Reading!

The Islanders (Chosen by Simon)

When Chris first described this book to me I couldn’t get my head around it all. I was familiar with his Dream Archipelago and it was clear, at least, that this book would take me back there. But was it a gazetteer of the islands? A collection of short stories? A guide book? A novel? A little of all? Or something else entirely?

And then I began to read it. The renowned Chaster Kammeston provides an introduction. But actually he doesn’t seem that sure what the book is. Any more than he is sure of the exact nature of the Archipelago. And anyway, who is Chaster Kammeston? And isn’t he meant to be dead?

And so the surprises keep on coming. A description of an island economy here. A terrifying account of an entirely lethal insect there. A story of a theatrical murder somewhere else. There are islands carved into a musical instruments. There are wonders here. And there are ordinary things. But neither are ever quite what you thought they were. And Kammeston, by the way, is never far away.

What on earth is going on?

But then the echoes start to ring. The suggestions occur. The memories entwine. A chapter from 80 pages before becomes something else in the light of what you have just read. This book changes as you read it. It twists in your hand and your head, shows another aspect, tells another lie.

And when I finished it, I started it again. And I know that I will go back again. And again. And each time I do the book will change. I might understand a little more or a lot less. But I will always be in love with it.

I can’t imagine a better book for a lifetime.

The Dervish House (Chosen by Marcus)

I’d never quite got around to reading any of Ian McDonald’s previous works. No particular reason (I have a copy of Brasyl on my shelf, still), but there it was. Just hadn’t had the right moment. But then the proof copy of The Dervish House arrived at the shop, back when I was a bookseller, and for some reason it went straight to the top of the teetering pile of ‘books to be read’. Which may have been one of the best decisions I made that year. For this is a remarkable, magnificent piece of work. As I was reading it, I kept on saying to my partner – who I don’t think has ever read an SF book in her life – “this book is good enough, brilliant enough, to give to anyone.”

It’s set a few years in the future, so that’s the SF bit out of the way. There’s a detective story in here. There’s some remarkable – and all too believable – thoughts about the future of technology, politics and business. There’s a love story, a thriller, some archaeology, a friendship between a young boy and an old man which warms the heart. There are terrorists, and crimes, and a group of friends who really feel like they are friends, not just convenient characters for an author to put together for the sake of a plot. There’s historical context, and cultural context, and sociological context, and religious context, none done with a heavy hand, all adding to the feel of the city, all adding to our knowledge of the characters, all adding to the book.

And oh, the prose. Muscular and fast-paced when it needs to be, languorous and elegant when that’s what the story requires, always readable. Make no mistake, this is a complex book with a complex plot and many many levels, but the read is effortless.

And if you just like reading fantastic, clever, funny, touching and important books, then this is for you as well.

I literally spent a solid year telling people they needed to read White Cat. Not just that it was a good book, but that there was a physical need for them to read White Cat. Why? Well, if you read it you’ll know. It’s amazing. You know from the very beginning that there will be a twist. You wait for the twist. And you get a twist and think, ok, that was good. And then . . . the entire book shifts again. And you’re gobsmacked (ok, I was gobsmacked). Filled with con artists, mobsters and magic, this is a story that refuses to let you go. And begs for you to tell everyone about. Mostly because, you just can’t believe what you’ve read.

Set in an alternative America where magic is transmitted by touch, our narrator, Cassel, has a shady past. His family are all magic workers (though he’s not) and all deeply involved with the mob and running cons. Cassel is haunted by his past. Cassel is a murderer. He murdered the girl he loves, though he has no memory of why. He doesn’t fit in with his family. He doesn’t fit in with the rest of the world. He’s constantly running some sort of con (yup, he’s the dorm bookie!). But, what he uncovers throughout the course of the book is that the biggest con could just be the life he’s leading!

I really can’t say any more as I’ll just spoil it. Go out and pick up a copy. Then, let’s talk!

Rivers of London (Chosen by Jon)

A novel as rich and diverse as the city itself, Rivers of London is a melting pot of brilliantly dark humour, riveting police procedural, chilling horror and fascinating history. London is rife with magic; it lurks in those dark corners you avoid late at night, it lingers in the alleys you’d never wander alone, it sparks in the cold, lifeless eyes of the stranger staring at you on the tube. That magic is about to burst free and bring with it something far nastier, far more dangerous and evil than anything the Met has had to deal with before. And standing its way: PC Peter Grant, London’s newest magician. Rivers of London will put a spell on you and bring London to life like never before.

Rendezvous with Rama (Chosen by Darren)

When we decided we’d each choose a ‘book for life’ in honour of World Book Day, there was really only going to be one choice for me. I think I was twelve when I first read an Arthur C. Clarke book (2001: A Space Odyssey – it was in a four-novel omnibus my mother had picked up for me; an amazing volume containing 2001, The Day of the Triffids, Silverberg’s A Time of Changes and I, Robot). 2001 tripped a wire in my head that had me hunting down Clarke novels and collections for decades to come, so I can honestly say I’ve been an avid reader of Arthur C. Clarke for all of my adult life.

Clarke’s range was very broad – more so in his short stories, but also in his novels – so I could have opted for one the Manifest Destiny novels, such as 2001: A Space Odyssey or Childhood’s End or one of his earlier space race books like Earthlight or A Fall of Moondust, but the book that best sums up what Clarke is about (to me, at least) is Rendezvous With Rama. It’s got science to the fore, it’s got one of the all-time great Big Dumb Objects (perhaps not so dumb), it’s got great human endeavour to intercept and explore the solar system’s new visitor and it’s got one of the best depictions of the exploration of an alien ‘world’ in all of SF. There’s sense of wonder to spare and a palpable atmosphere of tension evoked without the need to resort to clichéd uber-aggressive aliens. And, of course, it’s got Clarke’s signature note, the thing he did better than any other SF author: the killer last line that leaves you feeling like the top of your head’s been pried open and the universe has been poured in.

Rendezvous With Rama won the Hugo Award, the Nebula Award, the John W. Campbell Memorial Award, the Locus Award and the BSFA Award. It remains one of the landmark works of science fiction and, on this World Book Day, 2012, I would unhesitatingly recommend it to SF fans and neophytes alike.

It may seem odd to choose a book that isn’t published yet . . . but this is a wonderful, powerful and above all wise novel from the Mythopoeic Award winning novelist Kristin Cashore. It’s spellbinding, gorgeously written, well-paced; it keeps readers engaged with the main characters from the first page . . . and, equally, it keeps the revelations and surprises coming. It’s a novel with enormous heart. It’s also a novel that changes the reader.

I don’t want to make Bitterblue sound dense – it isn’t. The narrative is deftly told, the dialogue has a lightness of touch, and the story is propelled by Princess Bitterblue’s quest to uncover the truth about her kingdom and her people – even if that truth is buried beneath lies told from greed, from anger, from fear . . . and even from kindness. Along the way there is love, beauty and warmth. There is wonder, and there is compassion for even the most twisted of characters. And within all of that, there is wisdom: about the importance of truth, however much it hurts. About the human desire to forget difficult or painful things. About the fragile thing that is friendship.

It was the mystery at the heart of Bitterblue which kept me reading . . . but it’s the wisdom, the insight and the warmth with which Cashore writes that made me think long after I closed the covers. There is something Orwellian in Bitterblue’s advisors’ incitement to always ‘look forward’. There are painful but true observations about domestic abuse that wouldn’t be out of place in a Margaret Atwood novel. There is a brilliant inversion of the ‘absent father, wicked stepmother’ fairy tale trope (which can be seen in Graceling  and in Fire as well) as well with the evil father figure of King Leck who, despite being nine years dead when Bitterblue begins, is ever-present in the novel.

So this is the novel for life I propose. A rich, compelling and wonderful read, that’s about truth and lies, love and  betrayal, and how deeply a kindness can cut. It’s an exceptional novel, and one that will stay with you for life.