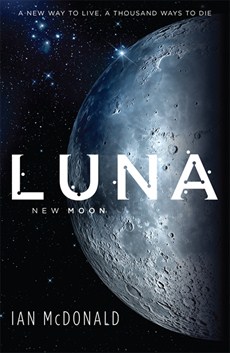 Want to win at Christmas? Not sure what to get the SF reader in your life? We’ve got 10 epic SF books that will ensure that you make their seasons readings merry and bright.

The Moon wants to kill you.

She has a thousand ways to do it.  The bitter cold of vacuum. The lethal sheet of radiation. Choking dust  as old as the Earth. Your weakening bones …

Or you could run out of money for water. Or air. Or simply run foul of one of the Five Dragons: the corporations that rule the Moon and control its vast  resources. But you stay, because the moon can make you richer than you can imagine. For as long as you can stay alive…

Luna is available in trade paperback and eBook.

This monumental trilogy traces the Akinya family across more than ten thousand years of future history … out beyond the solar system, into interstellar space and the dawn of galactic society.

One hundred and fifty years from now, in a world where Africa is the dominant technological and economic power, and where crime, war, disease and poverty have been banished to history, Geoffrey Akinya wants only one thing: to be left in peace, so that he can continue his studies into the elephants of the Amboseli basin.

But Geoffrey’s family, the vast Akinya business empire, has other plans. After the death of Eunice, Geoffrey’s grandmother, erstwhile space explorer and entrepreneur, something awkward has come to light on the Moon, and Geoffrey is tasked – well, blackmailed, really – to go up there and make sure the family’s name stays suitably unblemished. But little does Geoffrey – or anyone else in the family, for that matter – what he’s about to unravel.

Eunice’s ashes have already have been scattered in sight of Kilimanjaro. But the secrets she died with are about to come back out into the open, and they could change everything.

Or shatter this near-utopia into shards …

The Poseidon’s Children trilogy is composed of Blue Remembered Earth, On The Steel Breeze and Poseidon’s Wake. All are available now where all good books are sold.

The Promise of the Child by Tom Toner

In the far future man has spread out into the galaxy. And diversified. Some have evolved physically into strange new forms, some have become immortal. Some hark back to the old ways. We have built a glorious new future. One that stretches from the sleepy Old World, to new terraformed planets and Dyson spheres built around artificial suns. For as long as we can remember (and some have lived 12,000 years) we have delighted in a rich new existence. Yes, there have been wars but we are content in our splendour. Art is revered, life is easy, death forgotten for many. But now there are rumours of a bid to oust the Emperor and a worrying story that our history is not as we remember it – not only man left Earth…

The Promise of the Child is available in trade paperback and eBook.

With Earth abandoned, humanity resides on Station, an industrialised asteroid run by the sentient corporations of the Pantheon. Under their leadership a war has been raging against the Totality – ex-Pantheon AIs gone rogue.

Now that the war has ended, Jack Forster and his sidekick Hugo Fist, a virtual ventriloquist’s dummy tied to Jack’s mind and created to destroy the Totality, have returned home.

Labelled a traitor for surrendering to the Totality, all Jack wants is to clear his name but when he discovers two old friends have died under suspicious circumstances he also wants answers. Soon he and Fist are embroiled in a conspiracy that threatens not only their future but all of humanity’s. But with Fist’s software licence about to expire, taking Jack’s life with it, can they bring down the real traitors before their time runs out?

Crashing Heaven is available in trade paperback and eBook.

The starship Ariel is on a mission of the utmost secrecy, upon which the fate of thousands of lives depend. Though the ship is a mile long, its six crew are crammed into a space barely large enough for them to stand. Five are officers, geniuses in their field. The other is Will Kuno-Monet, the man responsible for single-handedly running a ship composed of the most dangerous and delicate technology that mankind has ever devised. He is the Roboteer.

Will is a man bred to interface with the robots that his home-world Galatea desperately needs to survive. He finds himself sent behind enemy lines to discover the secret of their newest weapon. What he discovers will transform their understanding of both science and civilization forever… but at a cost.

Roboteer is available in trade paperback and eBook.

The Tabit Genesis by Tony Gonzales

They left Sol in two great ships, carrying with them the last hope for humankind. Destined for different stars, their mission was to ensure the survival of our species. One ship was never heard from again. Decades later, the other arrived at a lifeless world, where the survivors learned that Earth was lost not to famine, but to an alien species determined to eradicate humans from existence.

Man is not alone in the universe, and the last of us are hunted. Driven by strong characters facing tremendous odds, Tony Gonzales delivers SF in the grandest tradition: an epic adventure full of colossal ships, vast battles and unimaginable challenges.

The Tabit Genesis is available in trade paperback and eBook.

Something Coming Through by Paul McAuley

The aliens are here. And they want to help.

The Jackaroo have given humanity fifteen worlds and the means to reach them. They’re a chance to start over, but they’re also littered with ruins and artifacts left by the Jackaroo’s previous clients.

Miracles that could reverse the damage caused by war, climate change, and rising sea levels. Nightmares that could forever alter humanity – or even destroy it.

Chloe Millar works in London, mapping changes caused by imported scraps of alien technology. When she stumbles across a pair of orphaned kids possessed by an ancient ghost, she must decide whether to help them or to hand them over to the authorities. Authorities who believe that their visions point towards a new kind of danger.

And on one of the Jackaroo’s gift-worlds, the murder of a man who has just arrived from Earth leads policeman Vic Gayle to a war between rival gangs over possession of a remote excavation site.

Something is coming through. Something linked to the visions of Chloe’s orphans, and Vic Gayle’s murder investigation. Something that will challenge the limits of the Jackaroo’s benevolence …

Something Coming Through is available in trade paperback, eBook and audio download.

An awe-inspiring Planetary Romance from Terry Pratchett’s co-author on the Long Earth Books.

The very far future: The Galaxy is a drifting wreck of black holes, neutron stars, chill white dwarfs. The age of star formation is long past. Yet there is life here, feeding off the energies of the stellar remnants, and there is a mind, a tremendous Galaxy-spanning intelligence each of whose thoughts lasts a hundred thousand years. And this mind cradles memories of a long-gone age when a more compact universe was full of light …

The 27th century: Proxima Centauri, an undistinguished red dwarf star, is the nearest star to our sun – and (in this fiction), the nearest to host a world, Proxima IV, habitable by humans. But Proxima IV is unlike Earth in many ways. Huddling close to the warmth, orbiting in weeks, it keeps one face to its parent star at all times. The ‘substellar point’, with the star forever overhead, is a blasted desert, and the ‘antistellar point’ on the far side is under an ice cap in perpetual darkness. How would it be to live on such a world?

Proxima tells the amazing tale of how we colonise a harsh new eden, and the secret we find there that will change our role in the Universe for ever.

Proxima is available in paperback, eBook and audio download.

The Age of Scorpio by Gavin G. Smith

Of all the captains based out of Arclight only Eldon Sloper was desperate enough to agree to a salvage job in Red Space. And now he and his crew are living to regret his desperation.

In Red Space the rules are different. Some things work, others don’t. Best to stick close to the Church beacons. Don’t get lost.

Because there’s something wrong about Red Space. Something beyond rational. Something vampyric…

Long after The Loss, mankind is different. We touch the world via neunonics. We are machines, we are animals, we are hybrids. But some things never change. A Killer is paid to kill, a Thief will steal countless lives. A Clone will find insanity, an Innocent a new horror. The Church knows we have kept our sins.

The Age of Scorpio is available in paperback and eBook.

Kenstibec was genetically engineered to build a new world, but the apocalypse forced a career change. These days he drives a taxi instead.

A fast-paced, droll and disturbing novel, BARRICADE is a savage road trip across the dystopian landscape of post-apocalypse Britain; narrated by the cold-blooded yet magnetic antihero, Kenstibec.

Kenstibec is a member of the ‘Ficial’ race, a breed of merciless super-humans. Their war on humanity has left Britain a wasteland, where Ficials hide in barricaded cities, besieged by tribes of human survivors. Originally optimised for construction, Kenstibec earns his keep as a taxi driver, running any Ficial who will pay from one surrounded city to another.

The trips are always eventful, but this will be his toughest yet. His fare is a narcissistic journalist who’s touchy about her luggage. His human guide is constantly plotting to kill him. And that’s just the start of his troubles.

On his journey he encounters ten-foot killer rats, a mutant king with a TV fixation, a drug-crazed army, and even the creator of the Ficial race. He also finds time to uncover a terrible plot to destroy his species for good – and humanity too.

Barricade is available in paperback, eBook and audio download.