The trouble with the SF Masterworks list is you take once glance at it and you begin to realise just how little SF you’ve actually read. Well… I do, I expect there are plenty of you out there who’ve read the lot, but please spare a thought for those of us still exploring its treasures. Working in publishing means you’re often reading something new, so the opportunity to catch-up doesn’t come along often, but this summer I made room for a book that I’d been meaning to read for years and I’m so glad I did. 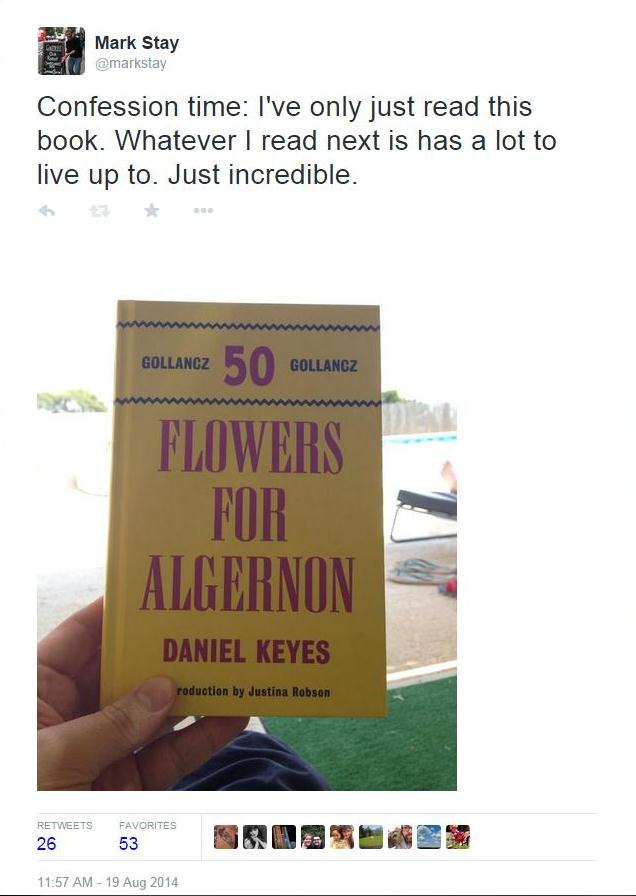 Daniel Keyes’ Flowers For Algernon tells the story of Charlie Gordon, a man in his thirties but with an IQ of only 68. Working at his uncle’s bakery, he seems doomed to be the butt of his co-workers’ pranks, but a glimmer of hope comes with a new surgical technique that might improve his mental performance. Tests on a mouse named Algernon have already been successful and now the scientists are looking for a human subject and Charlie fits the bill.

Written in an epistolary style (I word I confess I had to look up after a recent round on University Challenge) we’re in Charlie’s mind from the beginning and there’s a real sense of joy as you see his perception begin to improve. But it’s not long before his intelligence outstrips that of the scientists who monitor his progress, and with this comes an awareness of the cruelty and condescension of those around him. He seeks out the family that rejected him, and despite his academic excellence his emotional intelligence has some catching up to do when he falls in love.

And then Algernon the mouse dies and Charlie begins to realise that his days in the sun may be numbered.

Flowers For Algernon is a heart-breaking book, but not at all mawkish or sentimental (unlike some of the dreadful TV movies it has inspired). Keyes had worked extensively with students with learning difficulties and his compassion shines through. And you can judge a book by the awards it’s won (and this garnered many, including a Hugo for the original short story and a Nebula for the novel), but when a book has been banned by so many schools and libraries (because, God forbid that a person with a disability might have sexual urges!) it must surely be touching some kind of nerve and revealing some great truth.

Make time for this book. Charlie and Algernon will expand your own mind.