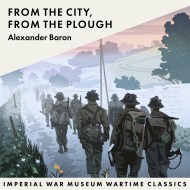 From the City, From the Plough

Spring 1944, the south coast of England. The Fifth Battalion, Wessex Regiment, wait patiently and nervously for the order to embark. There is boredom and…