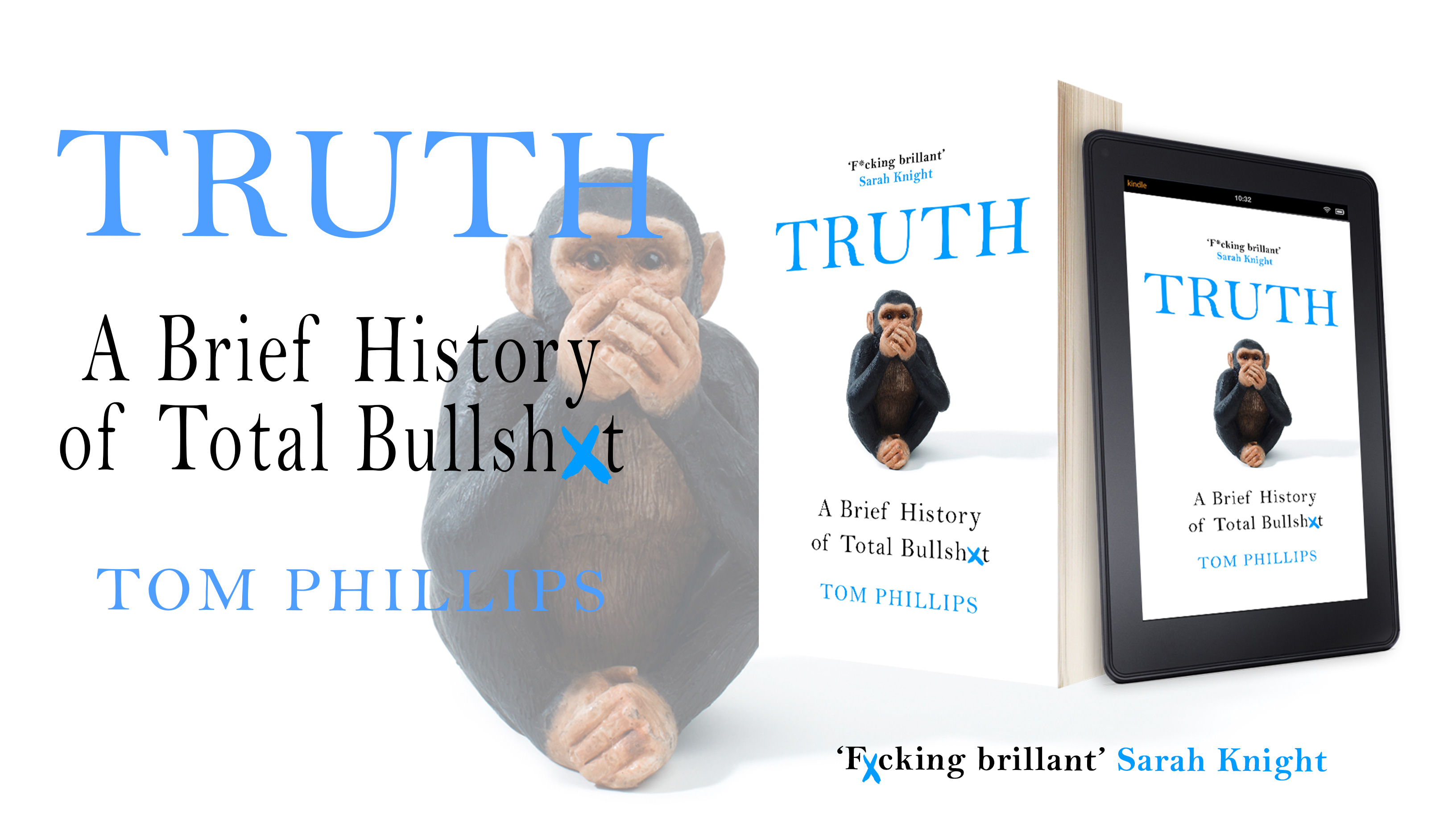 This is a book about TRUTH – and all the ingenious ways, throughout history, that we’ve managed to avoid it.

We live in a ‘post-truth’ age, we’re told. The US has a president who openly lies on a daily basis (or who doesn’t even know what’s true, and doesn’t care). The internet has turned our everyday lives into a misinformation battleground. People don’t trust experts any more.

But was there ever really a golden age of truth-telling? As the editor of the UK’s leading independent fact-checker, Tom Phillips deals with complete bollocks every day. Here, he tells the hilarious story of how we humans have spent history lying to each other – and ourselves – and asks an important question: how can humanity move towards a truthier future?

This is a book about truth – or, more specifically, about things that aren’t the truth.

Unfortunately, this means that, before we get any further into the book, we need to have a bit of a think about what ‘truth’ actually is. And, more importantly, what it isn’t.

The thing is, this all gets messy remarkably quickly, because of the sheer variety of ways there are of being wrong. This might come as a surprise to some people. A lot of us assume that there’s simply true and false, and moreover that they’re easy to tell apart. Unfortunately, it’s not quite that simple. Throughout history, those who’ve pondered the nature of truth and its opposites have realised one central principle over and over again: while there’s an extremely limited number of ways of being right, there’s an almost infinite number of ways to be wrong.

‘Truth had ever one father, but lies are a thousand men’s bastards, and are begotten everywhere,’ the Elizabethan writer Thomas Dekker bemoaned in 1606. Or, as the sixteenth- century philosopher Michel de Montaigne put it in his essay ‘Of Liars’: ‘If falsehood had, like truth, but one face only, we should be upon better terms . . . but the reverse of truth has a hundred thousand forms, and a field indefinite, without bound or limit.’

This book is an attempt to catalogue just a few of those hundred thousand forms.

Ours is far from the first period in history to have become obsessed with truth and the lack of it. Indeed, there’s a whole couple of centuries that, in Europe, are sometimes known as the ‘Age of Dissimulation’ because lying was so prevalent – the continent was being torn apart by religious strife from the 1500s onwards, and everybody had to wear a mask of deception just to survive.

Machiavelli, a man so connected with the art of political deception that we still (rather unfairly) use his name to describe it, wrote, in 1521, that ‘For a long time I have not said what I believed, nor do I even believe what I say, and if indeed I do happen to tell the truth, I hide it among so many lies that it is hard to find.’2 Let’s be honest – we’ve all had days at work like that.

So concerned with falsehood were people throughout history that they came up with a remarkable variety of ways to identify liars. The Vedas of ancient India proposed a method based on body language, saying that a liar ‘does not answer questions, or they are evasive answers; he speaks nonsense, rubs the great toe along the ground, and shivers; his face is discoloured; he rubs the roots of the hair with his fingers; and he tries by every means to leave the house . . .’ Also in India, a few centuries later, was a weight-based method: the accused liar would be put on a set of scales with a perfect counterbalance. They would then get off, the scales would be given a short speech exhorting them to reveal the truth, and the person would get back on. If they were lighter than before, they were not guilty; if they were the same weight or heavier, they were guilty.

(Interestingly this implies a completely different relation- ship between weight and truth to many occult trials in Europe: in India, lightness was associated with innocence, whereas in Europe appearing unexpectedly buoyant could be enough to condemn someone accused of witchcraft. As such, the Indian approach is a judicial process that makes the rare argument for the benefits of weeing yourself while in court.)

Of course, other cultures preferred simpler, more direct methods of identifying liars, such as red-hot pokers or boiling water. It is unclear if these were any more effective.

These days, of course, we classify lies differently. But, even then, there are subtleties that you might not be aware of. Everybody’s heard of white lies – harmless social fictions intended to enable us to all get along without killing each other – but did you know there are other colours of lie? ‘Yellow lies’ are those told out of embarrassment, shame or cowardice, to cover up a failing: ‘my laptop crashed and deleted that report I said I’d definitely have finished by today’. ‘Blue lies’ are the opposite, lies downplaying your achieve- ments, told from modesty (‘oh, the report’s nothing special, Cathy wrote most of it really’). ‘Red lies’ might be the most interesting of all – they’re lies that are told without any intent to deceive. The speaker knows they are lying, the speaker’s audience knows that they’re lying, and the speaker knows that the audience knows. The point, here, isn’t to mislead anybody – it’s to signal something to the audience that can’t be spoken out loud (whether that’s basically ‘fuck you’ or the more benign ‘shall we all just pretend that didn’t happen’). Imagine a couple denying to their neighbours that they had a huge row last night when they know everybody could hear it, and you’re in the right territory.

It’s often said that a lie can travel halfway around the world while the truth is still getting its boots on. (The question of exactly who said this is a thornier matter. It’s often attributed to Mark Twain, or to Winston Churchill, or to Thomas Jefferson, or to any number of the other usual suspects for quote attribu- tion. These attributions are, of course, all lies. The earliest formulation of it may in fact have been from the iconic Irish satirist, Jonathan Swift, who wrote in 1710 that ‘Falsehood flies, and the Truth comes limping after it.’)

Whoever said it, it’s certainly true that bullshit can move with remarkable and terrifying speed, as you’ll know if you’ve ever tried to debunk rumours on the Internet – that is, in fact, my day job, so, believe me, I get it.

But, in reality, the reason that untruth so often has the advantage over truth has less to do with fact and fiction’s relative speed, or even with truth’s impractical footwear choices, and more to do with the sheer scale and variety of falsehoods on offer. For every lie that travels halfway round the world, there may well be thousands that never make it out of the front door. But the sheer number of possible lies out there – unconstrained as they are by the need to match up to reality – provides a huge Darwinian testing ground to find the most compelling and long-lasting among them – those zombie untruths that will keep coming back again and again. It’s like those species of fish that lay two million eggs, just so that two of their offspring will survive.

The truth, by contrast . . . well, it’s kind of boring. It just sort of sits there, a small grey blob of indeterminate size, familiar yet inscrutable. In addition to being slightly dull, it’s also remarkably frustrating; as anybody whose job it is to try to pin down small fragments of truth will testify, it has a nasty habit of slipping out from under your grasp just when you think you’ve got hold of it.

There are, of course, certain things that are simply, uncontestably true: fire is hotter than ice; the speed of light in a vacuum is a constant; the best song ever recorded is ‘Dancing On My Own’ by Robyn. But once you go beyond these immutable laws of nature, everything gets murky alarmingly quickly. You find yourself saying things like, ‘The best available evidence suggests . . .’ and, ‘Yes, but what about the big picture?’ rather a lot. Anyone who has spent time in pursuit of accuracy and evidence understands how every new fragment of knowledge has a tendency only to raise ten more questions; every time you think you’re approaching enlightenment, reality recedes further towards the horizon, while you’re left drowning in a sea of caveats. Truth, by this measure, is not so much a thing; it’s more of a long, irritating journey towards a destination you’ll never reach.

The myriad untruths our world offers us, meanwhile, are seductive, adaptable and – if we’re honest – can often be tremendous fun.

It’s that sheer variety of untruth that this book will look at, because lies are in fact only one manifestation of the ‘hundred thousand forms’ that the reverse of truth can take. 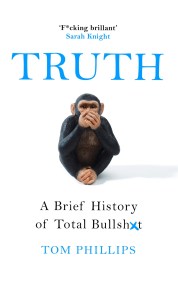 This is a book about TRUTH - and all the ingenious ways, throughout history, that we've managed to avoid it.

We live in a 'post-truth' age, we're told. The US has a president who openly lies on a daily basis (or who doesn't even know what's true, and doesn't care). The internet has turned our everyday lives into a misinformation battleground. People don't trust experts any more.

But was there ever really a golden age of truth-telling? As the editor of the UK's leading independent fact-checker, Tom Phillips deals with complete bollocks every day. Here, he tells the hilarious story of how we humans have spent history lying to each other - and ourselves - and asks an important question: how can humanity move towards a truthier future?