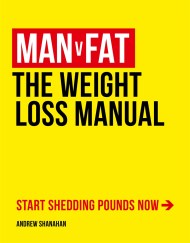 Man v Fat is a practical and supportive resource for men, written by a normal bloke who just wanted to lose some weight. One day…