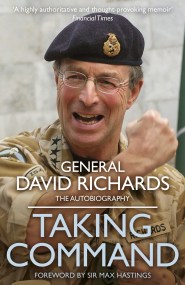 General Sir David Richards is one of the best known British generals of modern times. In 2013 he retired after over forty years of service…