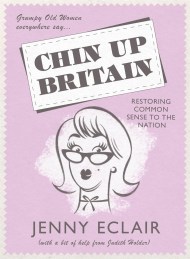 Chin up, Britain! Now is the time to return to basic commonsense and embrace a new austerity. Can't afford a holiday? Slather on some sun…