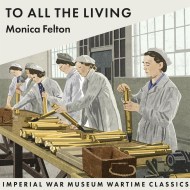 To All The Living

In January 1941 Griselda Green arrives at Blimpton, a place 'so far from anywhere as to be, for all practical purposes, nowhere.' Monica Felton's 1945…