Philip Clark, author of Dave Brubeck: A Life in Time, has put together a special playlist dedicated to the man himself.

“Recorded when he was a student, Brubeck’s right hand was alive to the transformative powers of improvisation as his left provided a muscular, stride piano motor.”

“Brubeck’s first fully fledged solo on record…climaxed with six hammered clusters perched somewhere on the border between harmony and noise.”

“Brubeck takes the title ‘I Didn’t Know What Time It Was’ literally as his introduction bends and distends time, the beat a bullet dodged.”

“Brubeck drove his solo into a tangle of compressed Jackson Pollock-like zigzags that defied harmonic analysis.”

“Performed live at Carnegie Hall in 1963, ‘Blue Rondo à la Turk’ and ‘Take Five’ were taken to a whole other plane, with digressive, exploratory solos that clawed open their structures.”

“The album ‘Time In’ included the uncharacteristically bop-flavoured ‘Cassandra’.”

Things Ain’t What They Used To Be – Dave Brubeck Trio featuring Gerry Mulligan, 1968

“Brubeck’s solo begins with a savage flourish that growls from the lower end of the piano and leaves the tonality of the piece far behind.”

“Two Generations of Brubeck – Dave working with his sons – was a protean leap into all sorts of unknowns…reworked versions of Brubeck classics slammed into freshly composed pieces.”

“After two choruses of choppy, angular playing – but in time – all hell breaks loose…Brubeck’s right hand parts company with his left hand, an illusion of two different tempi.”

“‘Take Five’ would be different each night, as Brubeck moulded his signature piece around the consequences of time, place and mood.” 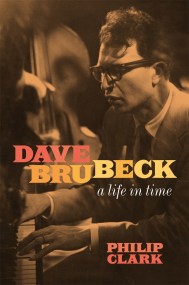 Dave Brubeck: A Life in Time

In 2003, music journalist Philip Clark was granted unparalleled access to jazz legend Dave Brubeck. Over the course of ten days, he shadowed the Dave Brubeck Quartet during their extended British tour, recording an epic interview with the bandleader. Brubeck opened up as never before, disclosing his unique approach to jazz; the heady days of his 'classic' quartet in the 1950s-60s; hanging out with Duke Ellington, Charlie Parker, Louis Armstrong, and Miles Davis; and the many controversies that had dogged his 66-year-long career.

Alongside beloved figures like Ella Fitzgerald and Frank Sinatra, Brubeck's music has achieved name recognition beyond jazz. But finding a convincing fit for Brubeck's legacy, one that reconciles his mass popularity with his advanced musical technique, has proved largely elusive. In Dave Brubeck: A Life in Time, Clark provides us with a thoughtful, thorough, and long-overdue biography of an extraordinary man whose influence continues to inform and inspire musicians today.

Structured around Clark's extended interview and intensive new research, this book tells one of the last untold stories of jazz, unearthing the secret history of 'Take Five' and many hitherto unknown aspects of Brubeck's early career - and about his creative relationship with his star saxophonist Paul Desmond. Woven throughout are cameo appearances from a host of unlikely figures from Sting, Ray Manzarek of The Doors, and Keith Emerson, to John Cage, Leonard Bernstein, Harry Partch, and Edgard Varèse. Each chapter explores a different theme or aspect of Brubeck's life and music, illuminating the core of his artistry and genius.